RUSH: There is something else happening out there that has me just as ticked off as now this Durham business does, and that is this joke of a judge, Emmet Sullivan. Have you heard about this? Have you heard the latest? Judge Sullivan went out got a lawyer. He went out and got David Gregory's wife, Beth Wilkinson, went and got a lawyer. This judge, Emmet Sullivan, has now asked for the entire en banc Court of Appeals to hear his case.

I predicted that he would go en banc, meaning he wants the entire roster of judges, not just the three-judge panel that already ruled against him. This is the judge that will not let the DOJ drop the charges on Mike Flynn. The judge has nothing to say about this. The DOJ refuses to charge him. They say he got a raw deal. They dropped the charges. The judge is trying to find a way to go ahead and sentence Flynn. The judge wants to send this guy to jail. 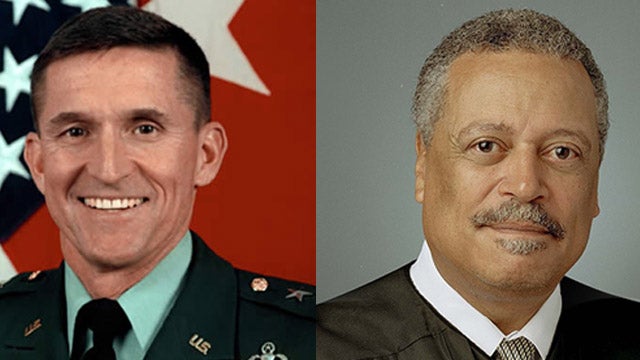 So he went out and got a lawyer, David Gregory's wife, Beth Wilkinson. And she filed a 69-page document with the court, and it reads this way, in part: The panels's decision, the judges, threatens to turn ordinary judicial process upside down. It is the district court's job to consider and rule on pending motions, even ones that seem straightforward. This court, if called upon, reviews those decisions, it does not preempt them. This case satisfies requirements of rule 35, and an en banc review should be granted.

Now, en banc, there's a three-judge panel on any circuit court -- any federal court of appeals. You don't know who the three judges are gonna be, but they decide the case, and then there is an option, the appellant can request every judge hear the case and rule. The reason why in this case this is such a problem, because Barack Obama packed this court with a bunch of wacko leftist judges. So if the entire roster of judges at this court of appeals hears the case, they could very well rule in favor of Flynn.

Now, it's all moot because Flynn is not gonna go to jail. At the last resort is a Trump pardon. But that's not the point here. The point is a great injustice is occurring to a great American patriot, Michael Flynn, who was set up as part of this bogus coup in the first place that now John Durham is saying (doing impression), "I may not be able to release the results before the election. I need to speed it up. I don't know. May not happen."

This is what ensnared Michael Flynn. In truth, Flynn is as innocent as a newborn baby in this. He didn't do anything. He was set up to create a process crime -- lie -- which wasn't even a lie. The DOJ has thrown out the case. Federal judge Emmet Sullivan will not drop the case despite a court order to do so. The three-judge panel told him to get rid of it and go on with your life, Judge. And he said, screw you, I want all the judges reviewing this.

This is the DC Circuit Court of Appeals. Sullivan's challenging their order, saying that it improperly assessed the case against Flynn. "The DOJ dismissed its case against Flynn in May after documents revealed the FBI was essentially working to entrap," the guy and did. He was totally set up like everybody was set up in this case. "Sullivan and his attorney," the wife of David Gregory, Beth Wilkinson, "demanded a review of the decision by the DC Circuit Court of Appeals, saying the three judges did not have the authority to grant a motion to dismiss, that it did not yet resolve in reliance on arguments never presented -" this is such bogus BS.

But this is part of the Durham investigation. Flynn was ensnared by this bogus coup, was taken into bankruptcy via legal fees, only pleaded guilty because the prosecutors threatened to then ruin his son's financial life. And that's when he called it quits and pled guilty, made a deal, to make it all go away. Then William Barr, DOJ, gets a look at all what happened here, and they're embarrassed about it, and they dropped all charges because not one of them is legit.

And Judge Sullivan won't let it go. The three-judge panel already slapped him down, and now he's asking for the whole panel. Could be 21 judges. I don't know what the total number of judges on the D.C. Circuit court of appeals is, but it's a lot of them because this is a busy, busy circuit. A lot of cases go through there, and most every case is decided with a three-judge panel, and every appellant has the option to ask for en banc. They're not always granted, by the way. Very rarely are they. So we shall see what happens here.