RUSH: I've got a couple sound bites. You know what? I'm gonna play 'em now. I gotta get these in, 'cause if I don't take advantage of the remaining time in this segment, I'm not gonna get 'em in. It's Crazy Bernie doubling down on Castro's "literacy program." Remember, you've got all these people like Jonathan Chait and Thomas Friedman running around saying, "It doesn't look good to be praising Castro, to be praising..."

The whole Democrat Party does! They wear Che Guevara T-shirts. Every Hollywood actor and actress loves Hugo Chavez, Fidel Castro. The Democrat Party sidles up to these people. Bernie is not an outlier. He's not weird in this. He's very common, and now he's out saying that Castro had one of the greatest literacy programs ever. He's been criticized for it. So now he's doubling down. In fact, he got a question. In fact, he was on with Fredo. 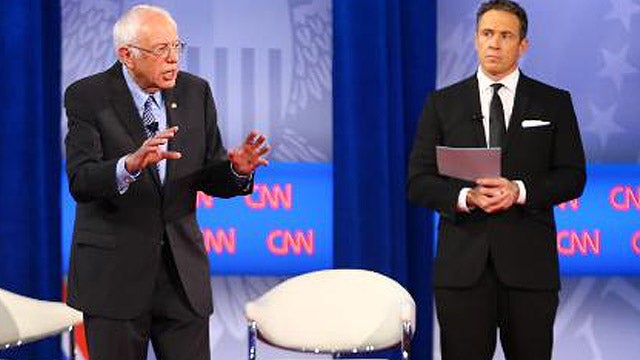 Fredo Cuomo says to Crazy Bernie, "You said on 60 Minutes it's unfair to simply say that everything is bad with the way Castro rules in Cuba. Now, Democrat members of Congress who represent Cuban-Americans in Florida are attacking your comment as absolutely unacceptable, singing the praises of a murderous tyrant," and, by the way, Crazy Bernie, keep talking, because you've just lost Florida for the Democrats. You just lost. The more you talk about what a great guy Castro is, you have no chance of Democrats of winning Florida.

SANDERS: When Fidel Castro first came to power, you know what he did? He initiated a major literacy program with a lot of folks in Cuba at that point who were illiterate, and he formed the literacy brigade. He went out and they helped people learn to read and write. You know what? I think teaching people to read and write is a good thing.

SANDERS: I happen to believe in democracy, not authoritarianism. China was another example. All right? China is an authoritarian country, becoming more and more authoritarian. But can anyone deny that they have taken more people out of extreme poverty than any country in history? Why do you criticize because I say that's the truth?

It is American manufacturing that has raised ChiCom citizens out of poverty. It's the ChiComs' attempt to meld capitalism with what they're doing, which is gonna be a very tough thing for them to sustain -- and Castro's "literacy program" was a propagandize program. We've been through that. So let's flashback, shall we? Fredo Cuomo, March 21st, 2016. This is... You know, Obama went to Cuba.

The left was having orgasms over it. (excitedly) "Oh, my God! He went down there (sniffles) and he met Cuba's leaders! Oh, this is great! (sniffling) This is great." They just loved it. Fredo loved it. Fredo showed up on CNN wearing some shirt that his dad brought back from Cuba. He's talking to Alisyn Camerota. She said, "Chris, I can't help but notice your shirt here. Tell us the history of that shirt."

FREDO: My guayabera? This shirt belonged to my father. It was given to him by Fidel Castro. It marked conversations going on decades ago that were the same as those today. The concern was the freedom of the people. What is the point of this communist regime if it is not to truly make everyone equal, not at the lowest level, not by demoralizing everyone, but lifting everyone up? My father, generations of politicians have been fighting this. So I wear this shirt as a reminder of that.

RUSH: "What is the point of this communist regime" in Cuba "if it is not to truly make everyone equal lifting everyone up?" What in the world! This guy is a prime-time anchor on CNN and is totally confused about what communism is and what its purpose is. But this is most of the left, and this is way too many average citizens in America but educated this. (sniveling) "Yeah, communism is about fairness and nobody can make fun of anybody.

"There's nobody mocked. Nobody's made fun of. Nobody... Nobody gets laughed at. Nobody's feelings are hurt and everybody's equal, and -- and everybody has the same and everybody's got economic opportunity and justice." It's such a crock, and here's Fredo Cuomo and his dad asking, "What's the point of this communist...?" Fidel Castro ran that island for 50 years, and the people got worse and worse and worse. It got so bad that the Cuban government had to give away rice cookers to some of the population, but there wasn't any rice to put in them.

RUSH: Steve in Winstead, Connecticut. I only have half a minute, but I want to get you on. I know you can get this in. Hi.

CALLER: (impression) "I want to discuss the existential threat of Bernie Sanders." He has an affection for the former dictator Fidel Castro who allowed Russia to park their nuclear missiles on their island and then, you know, they wanted to blow up the United States. I don't know how anybody could support that guy.

RUSH: You know, that is an interesting observation. Fidel Castro did indeed have nuclear missiles pointed at the United States as a Soviet client state, and here's Bernie Sanders and Michael Moore and the whole Democrat Party running around praising the guy. (Snort!) It's a joke. I mean, these people ought to be irrelevant by now to a vast majority of us.